In June 2015, His Serene Highness Prince Albert visited Glenmorangie’s Highland home, to explore the unseen lengths to which Glenmorangie goes in the creation of its unnecessarily well-made whisky. There, on the shores of the Dornoch Firth, the Prince – a renowned connoisseur of single malts – selected a single cask, with the guidance of Bill Lumsden, Glenmorangie’s Director of Distilling and Whisky Creation. 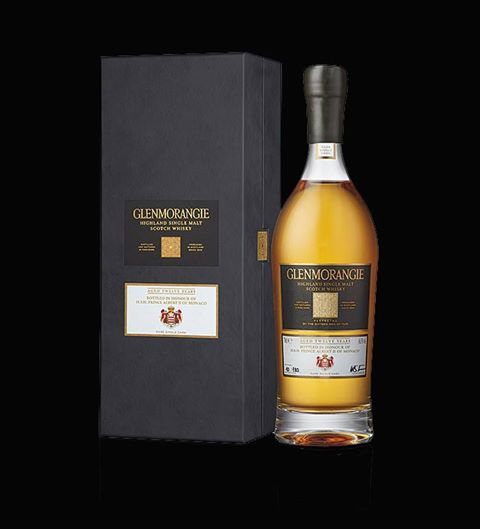 Lumsden said: “The beautiful, pale gold whisky we chose was matured in an ex-bourbon cask for 12 years. Reflecting nature’s gifts in its notes of heather, honey, bananas, peaches and lime, the bottling epitomises the Prince and Glenmorangie’s combined passion for single malt and the natural world.”

Adorned with the coat of arms of the Prince’s House of Grimaldi, just 180 bottles have been created. The first two have already been sold, for a price of 47,000 euro. Both fell under the auctioneer’s hammer at the Monte Carlo Whisky Society’s annual festival in support of Glenmorangie’s environmental partner, the Marine Conservation Society – the UK’s leading marine charity that actively protects the very shores that Glenmorangie has called home since 1843.

His Serene Highness Prince Albert II of Monaco said: “I have a deep-rooted connection to Scotland through my Scottish great-great grandmother and during a recent visit to the Glemorangie Distillery, was delighted to select a rare single cask to be bottled in aid of the Prince Albert II of Monaco Foundation, which promotes sustainable development and protection of the environment. I am delighted that Glenmorangie also shares a similar commitment.”

Marc Hoellinger, CEO of The Glenmorangie Company, says “We are honoured to work with His Serene Highness Prince Albert on such an exclusive bottling, for such an important cause. Since 1843, the Distillery has made its home on the banks of the beautiful Dornoch Firth – which Glenmorangie is committed to protecting.”

Nose: A floral and citrus bouquet, underscored by chocolate, with distinct notes of sea shore.

Taste: A wonderful peppery mouthfeel is followed by tastes of vanilla, peaches, banana, lime and menthol.

Finish: A gentle aftertaste featuring berries, vanilla and marzipan, which is a nice addition to the complexity..